Over the past few years, there has been a noticeable trend on the streets of urban landscapes in metropolitan areas all over the map – the rise of the global Black dandy. I found myself immersed in this alternative world of fine and flyyyyy Black men and when I say fly I mean from head to toe, when I curated the first iteration of my Dandy Lion exhibit. Launched at Society’s HAE’s Pop Up Gallery in Harlem in November 2010 during the nascent years of the resurgence of the Black dandy movement, in terms of imagery, Dandy Lion read like a breath of fresh air.

Up until that point, there were very few conversations being had about the Black dandy in contemporary popular culture. There was an inundation of images of the Black man as “thug” however, (a trend that we haven’t been able to shake over the past 400 years). Then in Fall 2009, Columbia University professor Monica L. Miller, published her dissertation research – Slaves to Fashion: Black Dandyism and the Styling of Diasporic Identity. Despite its academic tone and extensive research which could have easily intimidated the leisure reader, the book was widely discussed in pop culture, fashion and academic circles everywhere, especially in New York City. In this critical text, Dr. Miller provides an extensive chronology of the Black dandy from his 18th century European origin – Julius Suboise – to his present day contemporary, Andre 3000.

Coinciding with the release of Slaves to Fashion, an Italian photographer by the name of Daniele Tamagni also published a body of work called Gentlemen of Bacongo, in which he documented the phenomenon that is the Sapeurs of west Africa’s Democratic Republic of Congo. Better known as La S.A.P.E. Société des Ambianceurs et des Personnes Élégantes (translation: The Society for the Advancement of Elegant People), the sapeurs of the Congo, gentlemen who exude style and class in brightly adorned suits, defy the impoverished socio-economic realities of their community and use fashion to assert their masculinity and humanity.

What and WHO is a Dandy?

To some, the word “dandy” is more of a turn off than a compliment. Particularly within the Black community, the term dandy is associated with its classical European origins, white men in petticoats, pointed shoes and multi-layered lace blouses with accompanying ruffled sleeves. While both the word and style has its origins in Victorian and Edwardian era Europe, the presence of Black men in classic European fashion has always disrupted this European aristocratic aesthetic.

Throughout history, most notably the past two centuries, Black men have used fashion as a tool of rebellion. When self-styled, the African Diasporan man in the West has relied upon his innate sensibilities to express his masculinity, his humanity, his individuality. In styling himself, particularly in dress mostly associated with a particular class, station in life, education and social status of another race, as trickster the African Diasporan dandy cleverly manipulates clothing and attitude to exert his agency rather than succumb to the limited ideals placed on him by society. A Black dandy is deliberate about letting you know exactly who HE is and not what you want him to be.

Be clear, every brother in a zoot suit and bow tie does not a dandy make. It is the combination of specific elements and accoutrements that distinguishes Black dandies from your every day dapper don. A Black dandy can be defined as a self-fashioned gentleman who intentionally appropriates classical European fashion with an African Disaporan aesthetic and sensibilities. He is a rebel – a modern day representation of the African trickster. His style and identity are generally a contradiction – to the stereotypes, boxes, categories, or ideas that society has about him (and in some cases… her).

Today, the fashion of Black dandies is more a nod to the style of their grandfathers than the likes of Oscar Wilde or Beau Brummel. They mix vintage with modern pieces designed on London’s Seville Row, African prints with polk-a-dots and plaid, flamboyant colors with classic lines. The sampling of their style from various eras and cultures is a manifestation of the hip-hop era that has produced them.

The men photographed in The Dandy Lion Project are exceptional in both style and manners and provide the opportunity for a paradigm shift to occur as it relates to how men of African descent are seen and but more importantly as a platform, it highlights the self-articulation of sartorial Black men.

This traveling photography and film based exhibition project features the images of photographers and filmmakers from various regions around the African Diaspora. Their subject matter is young Black men in city, rural, literal and abstract landscapes across the globe, who defy stereotypical and monolithic understandings of masculinity within the Black community. Dandy Lion confronts the “thug” narrative and represents alternative identities. 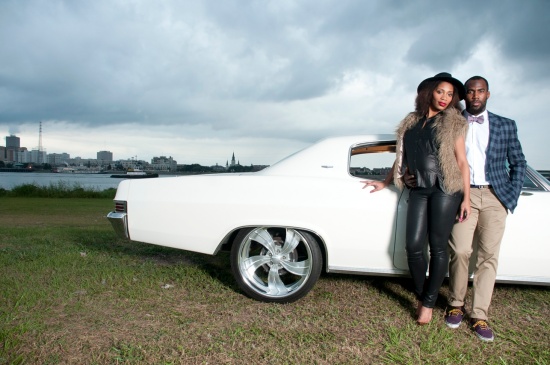 The subjects are all Black men, yet are as diverse in ethnicity and culture as the project’s photographers. The nationality of The Dandy Lion Project’s subjects range from British, Jamaican, African American to South African, French and Congolese. Also, the project is not specific to locale – images were shot in various places around the Diaspora including throughout the U.S., South Africa, the Congo and Europe.

The first comprehensive exhibition of its kind, The Dandy Lion Project provides an exploration of a popular conversation in nuanced contemporary sartorial expressions and the fluidity of Black male masculinity. It is my hope that these well-dressed trickster, rebels continue to push the envelope and that talented photographers are nearby to document them bucking against the system, in their suits and ties.

For more information about The Dandy Lion Project, visit:
http://www.thedandylionproject.tumblr.com